How Honey Is Made

We all know that honey comes from bees, but how do these little creatures manages to make something so tasty?

During the spring and summer months, worker bees over three weeks old fly all around the area near their hive. While they are flying they look for two things; water and nectar. Nectar is a sweet, watery liquid produced by plants in their flowers. The plants do this to attract insects like bees to help them in pollination. When they find a plant with some nice pollen they suck it up through a special tube called a proboscis and carry it in their special stomachs used only for nectar. They will then visit hundreds more flowers, sometimes carrying as much as half their own body weight in nectar! 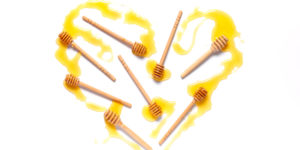 While the nectar is in the bee’s special stomach it mixes with enzymes that begin turning it into honey. The bee then returns to the hive and passes the nectar on to other worker bees who then pass it on to others in turn; just like a game of honey pass the parcel! The honey is then stored in small compartments made out of beeswax. But, at this point the nectar mixture is still too wet and runny so more worker bees fan it with their wings so that it becomes the right consistency. When they have made the honey just the right consistency they seal the compartment with more beeswax so that it will keep for winter, or for the beekeeper to collect!

Taste is in the pudding

The bees that have found a really good place to get nectar let other bees know where it is by doing a little dance. This way the other bees can fly straight to this place and make more honey. In order to make just 500g of honey it takes a team of 10,000 bees who have to visit two million flowers! All honey tastes slightly different because of the amounts of different flowers used to make it, some honey is dark and tastes almost like treacle while some is a light colour and is very sweet.

What are you looking for?