Fun info for kids and grown-ups

The types of bee inhabiting the UK are bumblebees, honey bees and solitary bees. Honey bees (and bumblebees) live in complex social communities. If the group has one mother of males and females, and there is a division of labour, the mother is likely to be the queen, the females her workers and the males her drones. 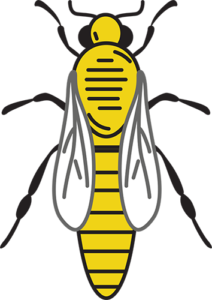 Is the only fertile female in the colony and so produces the offspring. 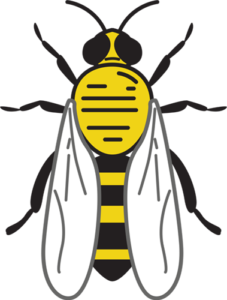 Have many roles, but are mainly responsible for collecting and storing pollen. 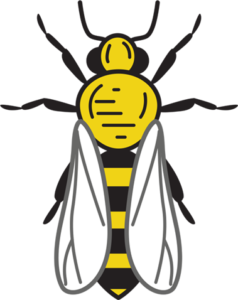 Are male and fertilise the queen bee’s eggs.

A honeycomb is built by bees in their nest. It is a mass of hexagonal cells; one cell in a honeycomb is used by the queen bee to lay her eggs. When bees store nectar and sweet deposits in honeycomb, it develops into honey. Honey bees consume honey for food or to develop wax.

Bees and your garden

The British Beekeepers Association (BBKA) has warned the number of honeybees is in decline. Bees play a vital role in pollinating crops, so there is concern for why this is happening. One theory is pesticide use. Your garden can become bee-friendly if you avoid using chemicals to control weeds and pests.

Your garden will be an attractive environment for bees if you designate a large area for growing flowers. Plant flowers that bloom in spring and early autumn, not just summer, so that there is a source of nectar for a longer period of time. Consider keeping some weeds – flowering weeds are just as useful to a bee as flowers you have planted.

What are you looking for?